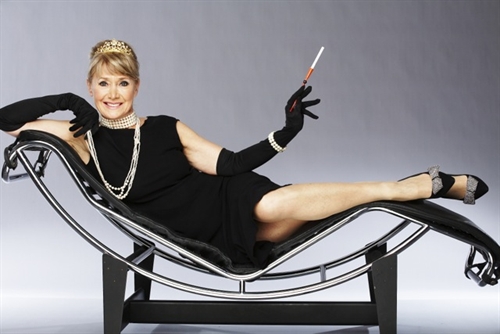 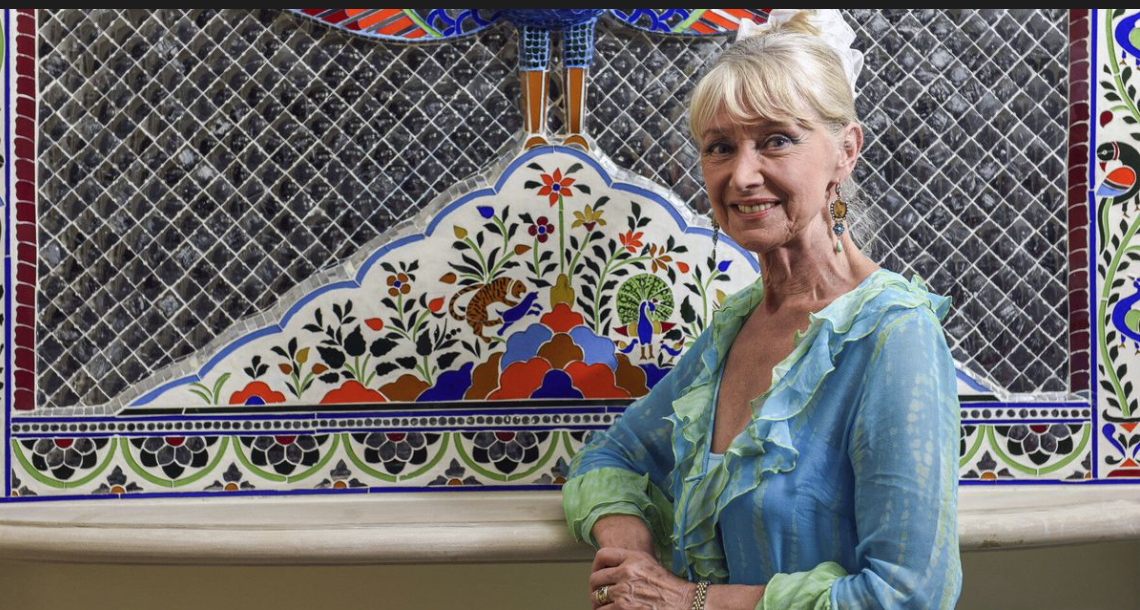 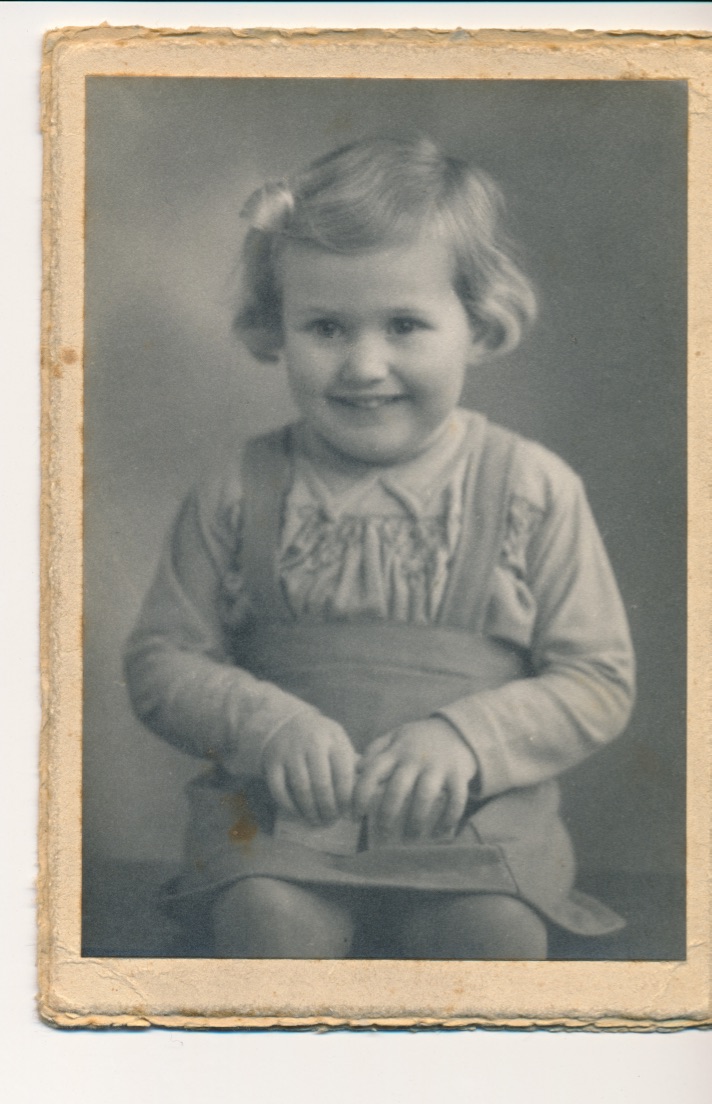 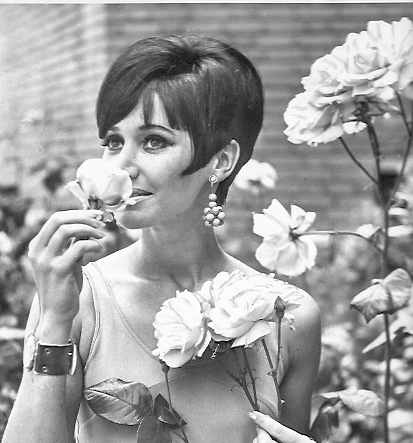 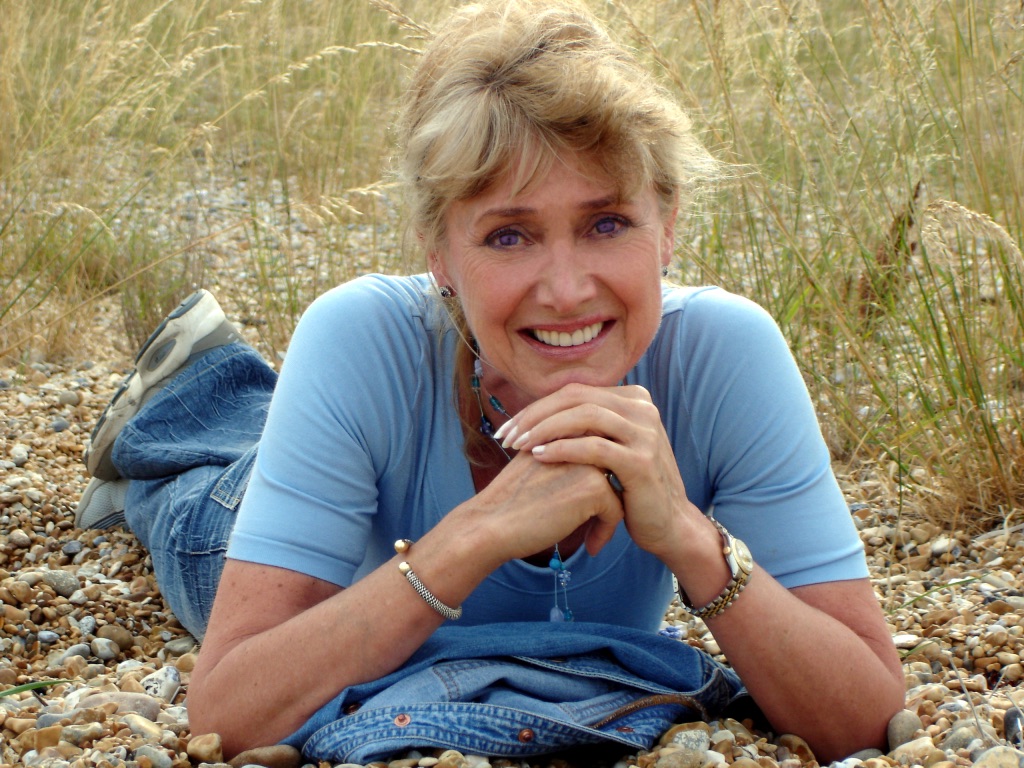 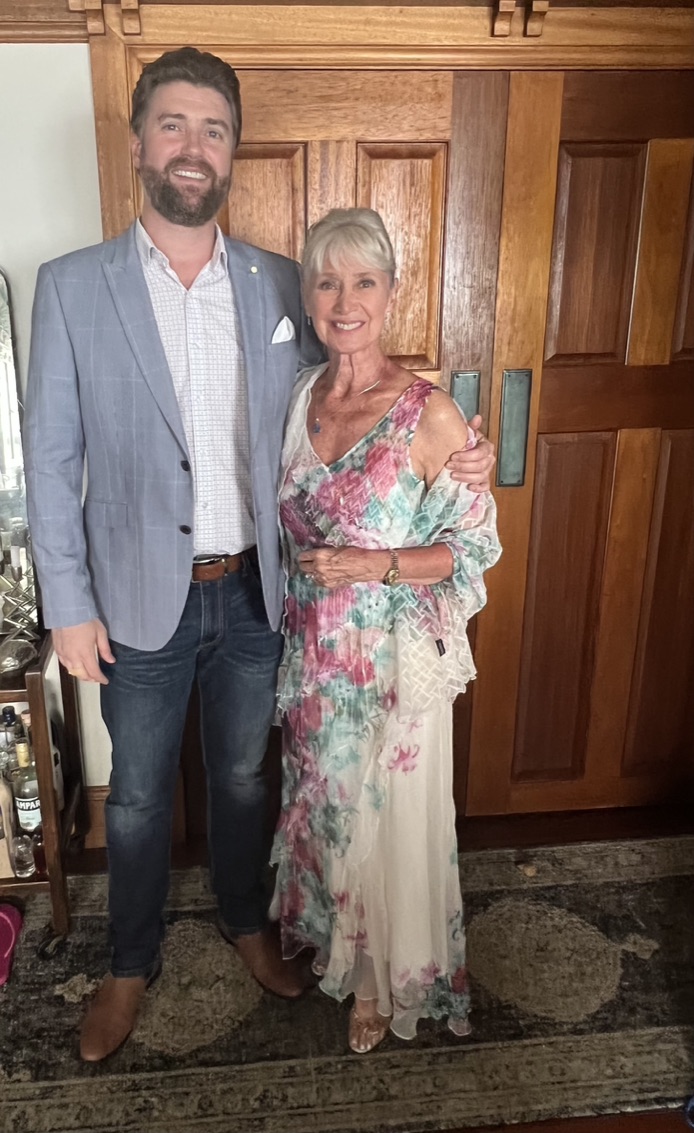 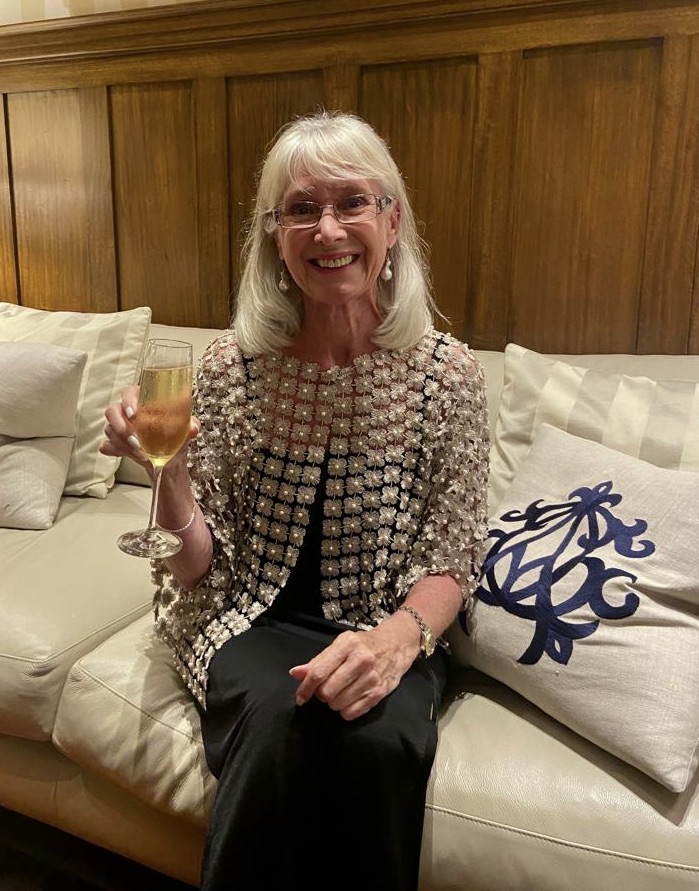 Although best known as a Television Newsreader, Jan has had a long and varied career in television and started her working life in theatre.

Born in Kent, Jan went to New Zealand and Australia in the early 60's where she appeared on both stage and television. She was the first woman newsreader on Television in Sydney in 1963 - quite a coup for a male dominated society and before the emergence of Women's Lib.!!

Her theatrical credits included a gruelling seven month tour of New South Wales with a Shakespearean Company called The Young Elizabethans. Jan played Portia in The Merchant of Venice and a witch in Macbeth - that's Rep. for you! Back in Sydney she played the part of Georgie in Iris Murdoch's A Severed Head opposite the late Robin Bailey. Jan starred with another well known English actor, Jack Watling, when she appeared in the John Chapman farce Diplomatic Baggage. She was invited to join the prestigious Union Repertory Company in Melbourne where she played Natasha in War and Peace and the lead in The Young Wife a tragic story about arranged marriages and the Greek community in Australia.

At the end of 1966, Jan returned home and her first job was as a Newsreader for Granada Television in Manchester. In 1968 she joined The Oxford Playhouse for a Repertory Season under the direction of Frank Hauser. Since then her career in Television has been varied ranging from the presentation of her own women's programme Women Only - which she fronted for six years for HTV as well as co-presenting the nightly news programme Report West; two years as a presenter on the BBC daytime magazine programme Pebble Mill concurrent with several series of The Food Programme for the BBC.

She compered the Eurovision Song Contest in 1982 and spent seven years as a newsreader with the BBC. She was twice voted Newsreader of the Year by the Television and Radio Industries Club TRIC, and also won the Pye Award as Television Personality of the Year in 1982.

Since leaving BBC News in Spring '87, Jan has been involved in Corporate Work making videos for companies on a wide range of subjects and hosting Company Conferences and Product Launches . She also presented a six part television series The West in Trust - the people and stories behind the National Trust Properties in the West Country.

In 1988, on the occasion of the centenary of the notorious Jack the Ripper, Jan was invited to present, with Peter Ustinov, a two hour documentary programme for American television which has since been shown in the UK and Australia. In 1989 Jan co-presented the BBC's Magazine Programme The Garden Party. In 1989, '90 and '91 Jan presented three series of craft programmes entitled Makers for the ITV This Morning programme (produced by HTV). Also in 1990, Jan was involved in Poetry Readings, one of which for English Heritage presented at the Orangery in Kenwood was entitled Personalities and Poetry.

In September 1992 Jan was invited to narrate "Peter and the Wolf" in Chester Cathedral as part of the 900 Years Celebration and Gala Concert. And in June '93 she repeated her narrator's role with the City of Birmingham Symphony Orchestra under the Russian Conductor, Yuri Simonov. In June and September 1993, Jan presented two weeks of the BBC 1 Series "Whatever Happened To?". She also made guest appearances on Radio 4's Gardening Quiz.

She was Chairwoman/Presenter on a series of programmes for Central Television in Summer 1994. The series entitled Right or Wrong took a look at some of the moral issues of the day e.g. Surrogacy, Domestic Violence, New Age Travellers.

In 1996, as a holiday relief, she read News on "The Big Breakfast" - at breakneck speed!; made a guest appearance on 'Good Morning South Africa' in Jo-burg; and another guest appearance talking about beauty and health on GMTV.

Since 2000 guest appearances have included: The Harry Hill Show; So Graham Norton; Lowri Awash with Colour; Newsreaders' Masterclass; Good Morning Australia; Esther; Through the Keyhole; a cameo appearance in the feature film Whatever Happened to Harold Smith starring Tom Courtenay. A Ten part series A Cook Back in Time; Esther; Watercolour Challenge; Liquid News Eurovision; The Morning Show; Good Food Live and Des & Mel. She also presented an RAF Concert at the Barbican to mark the 60th Anniversary of the Battle of Britain.

In 2006 she filmed the twenty part series Safari School for BBC; and took part in the series 'I'm A Celebrity, Get Me Out of Here!’

WRITING credits include Working in Television in a career series published by Batsford; Simply Looking Good - Beauty, fashion, health, diet and exercise tips for the working woman; a chapter on Korean cookery in an Encyclopaedia of Asian Cooking; and various magazine articles including a series on travel.

For the Mail on Sunday, Jan was commissioned to write an article on a trip to a closed town in Siberia. For the Daily Mail she has written on subjects as diverse as the merits of 'being of mature years' 'On being 50 - Milestone or Millstone'! and whether British Men are lousy at dating! She also recently reported on Husky Sledding in Lapland for the Travel section of the Sunday Telegraph. And on the occasion of the 70th Anniversary of the Battle of Britain, she wrote an article about French pilot – René Mouchotte

CORPORATE Work: Jan has been working in this field for decades and has established a reputation for professionalism and credibility working for companies large and small. December '95 and '96- she presented the Chartermark Awards for the Prime Minister, John Major and presented them again in ’97

PANTO credits include the Fairy in Robinson Crusoe at the Wimbledon Theatre with Dennis Waterman and Rula Lenska; Robin Hood in Babes in the Wood at the Hexagon, Reading with Little and Large and as Prince Charming in Cinderella at the Princess Theatre, Torquay. In 2003, Jan played Fairy Bowbells in the Carlisle Leisure Centre's production of Dick Whittington. In 2006 Jan played the Fairy Godmother in Cinderella at the Theatre Royal Windsor.

In the last few years she has appeared on Ready Steady Cook; Doctor Doctor; Destination Lunch; I'm A Celebrity, Get Me Out of Here, NOW; GMTV and Children In Need, Celebrity Cash in the Attic; Celebrity Masterchef, several times on GMTV and BBC Breakfast TV. Most recently she was on a Retrospective of Not the Nine O'Clock News; was in a 10 week run of Calendar Girls at the Noel Coward Theatre and in January 2010 took part in Celebrity Come Dine with Me. In 2011 she took part in Celebrity Five go on Holiday (To Turkey) and featured in Celebrity Ghost Stories.

2015 - Jan took part in a  documentary series for the BBC filmed in India looking at the viability of retirement there. Entitled 'The Real Marigold Hotel' it was very popular and has led to more series and also an offshoot called 'Marigolds on Tour'. Jan was part of the team who went to Cuba and Argentina

HOBBIES . Main loves are theatre, ballet, reading, particularly biographies and autobiographies. She enjoys entertaining friends to dinner and loves travel. She has dabbled with jewellery making and silver-smithing and very much wants to take up again Watercolour Painting.

After her sojourn in the Australian Rainforest in 'I'm a Celebrity, Get me out of here ......" - she has become something of an action woman - learning to ski, husky-sledding, snow mobiling and wingwalking.

Whilst the success of 'Real Marigold Hotel', has seen her travel to Cuba and Argentina for BBC documentary work, she became an ambassador for single travellers, (taking her to destinations such as Burma, Croatia, Canada) with writing commissions for various Travel publications.

Jan is a Freeman of the City of London

Jan is the Patron of Souvenir Français - a French association for maintaining war memorials and handing down the memory of them to future generations. It is comparable to the Commonwealth War Graves Commission. With her French origins, Jan feels very proud to be involved.

She is also proud to be an Assistant Guide at Canterbury Cathedral.

After 5 years of research, detective work and continually negative replies, Jan finally got a documentary about her sponsored French pilot, René Mouchotte, into the BBC SE ‘Inside Out’ programme in January 2013. It was also shown on BBC South and BBC North.?

Since the documentary aired, a Vitrine to René has been unveiled in the Lycée Français in Kensington.

In July 2013, at the British Ambassador's Residence in Paris, Sir (now Lord) Peter Ricketts presented BOB Medals to the Mouchotte and Lafont families. Two days later in Kent at the Battle of Britain Memorial Day at Capel-le-Ferne, the CAS Sir Stephen Dalton mentioned Mouchotte and Lafont in his address. In September Jan was invited to Gibraltar where , during the BOB Celebrations on the Rock of Gibraltar, the RAF HQ was renamed Mouchotte Building. In attendance was Air Marshal Sir Stuart Peach.

In 2014, at the British Ambassador's Residence in Paris, the remaining families of the Free French named on the BOB Wall were presented with their BOB Medals.

Apart from the birth of her son, flying with The Red Arrows, The Blades, and learning the trade of a Safari Guide on Safari School, count as the most wonderful experiences of her life.

On the flying front, Jan has been fortunate enough to have experienced flight in a wide array of planes and helicopters, large and small. Among the list, she ‘s flown in a Hunter at RAF Chivenor; a Bulldog at RAF Leeming; a Hawk at RAF Scampton and a Chinook from Strike Command to Lytham St. Anne’s.

Jan is a  proud member of the RAF CLUB in London

Jan is divorced and has one son, Jonathan, who currently lives in, Sydney, Australia.